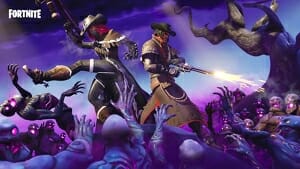 Halloween may be over, but apparently the zombies didn’t get the memo, as Fortnite’s Cube Monsters will continue to amble around the island for some time to come.

The patch notes for today’s update reveal the controversial ghouls are due to shift over to a new limited time mode (LTM) called “Team Terror”, which essentially seems to merge ideas from Fortnite’s team modes with its Fortnitemares mechanics. Two groups of 32 players must eliminate each other as monster …
Eurogamer.net