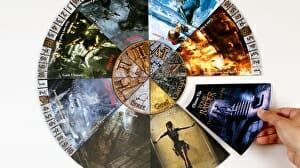 Done with Shadow of the Tomb Raider already, but still hankering for a bit more Lara in your life? Well, then you might be interested to hear about her latest, somewhat more lo-fi adventure, which arrives in the form of a new Tomb Raider board game in February next year.

Tomb Raider Legends: The Board Game, as Square’s new endeavour is known, comes from the makers of the (apparently pretty decent) Final Fantasy Trading Card Game and is described as a “fun and clever take on the classic vid…
Eurogamer.net