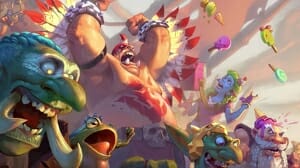 Following that unfortunate leaky appendage incident earlier today, Blizzard has confirmed that Hearthstone’s next expansion will indeed be Rastakhan’s Rumble – and it’s due to launch on PC and mobile on December 4th.

Rastakhan’s Rumble features 135 new cards (some of which have already been revealed), plus a variety of new mechanics – and Blizzard sets its scene thusly: “Once per generation, the troll tribes of Azeroth make a pilgrimage at King Rastakh…
Eurogamer.net