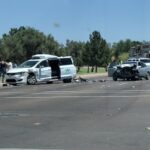 Matt Jaffee / Via Twitter: @mattjaffee A self-driving vehicle by Waymo, which is owned by the same company that owns Google, collided with another vehicle in Chandler, Arizona, on Friday. Minor injuries were reported. Chandler Police said the Waymo car was not the “violator vehicle.” “The Waymo was in the wrong place at the wrong … Read more

Uber has been suspended from testing autonomous vehicles in the state of Arizona following last week’s fatal crash in the city of Tempe, according to the Associated Press. The accident, which occurred at night and coincided with autonomous test driver Rafaela Vasquez looking down right before the moment of impact, left pedestrian 4… The Verge … Read more